Having an Enterprise Data Architecture that supplies sets of data quickly and securely to analysts is the key to unlocking insights for the Enterprise. Download our POV below.

On May 14, 2009, the European Space Agency launched the Planck spacecraft. Its mission was to map cosmic microwave radiation background. This map demonstrated

how each miniscule variation in temperature between photons represented a small pocket of density in the early universe that eventually gave rise to the complex structure of galaxies and superclusters we see today. But in October of 2013, the Planck exhausted its supply of liquid helium (as expected) and was sent its deactivation command.

In 2015, many analytics professionals are wondering when ETL processes will exhaust their supply of “liquid helium.” For now the vast field of data analysis faces many challenges. But above all is the need for and the ability to access quality data. Traditional data governance policies have kept data siloed – often due to valid security concerns and turf battles over which group in the organization “owns” the data. And traditional data lineage has mandated how and where the data is stored. We believe it’s time to send a deactivation code and rethink Enterprise Data Architecture.

And that rethinking starts with metadata and the data warehouse. Just like miniscule temperature differences between photons discovered by the Planck spacecraft provided insight into how the early cosmos became the place we live in 13.7 billion years later, having an Enterprise Data Architecture that supplies sets of data quickly and securely to analysts is the key to unlocking insights for the Enterprise.

Sagence is a management consulting firm designed to help organizations drive their businesses with information and insight through better data and analytics practices. 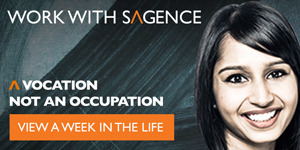